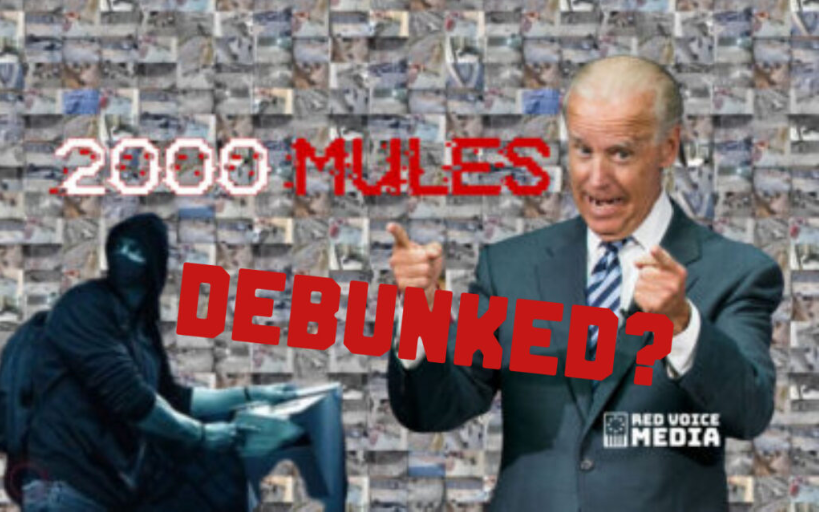 Although the White House is not willing to talk about the 2020 election and the numerous accusations surrounding the Democrats helping rig the results in Biden’s favor, the new film “2000 Mules” didn’t just accuse the Biden administration of stealing an election, it used cell phone data to show how it was done. Since the results were announced, former President Donald Trump has been adamant that the election was taken away from him and the American people.

While conservatives and Republicans who share this belief are often labeled conspiracy theorists, 2000 Mules debunked that accusation. And while the film has constantly been scrutinized and mocked by the mainstream media, it should be noted that the documentary helped solve a shooting using the same data.

Discussing the criticism the film has received, filmmaker Dinesh D’Souza, as can be seen in the video below, admitted that not a single outlet has approached him to discuss the claims. D’Souza used Fox News as an example. He said, “So their idea seems to be not to have the conversation, but to prevent it and to do so by appealing to what are clearly these left wing fact checks on the movie fact checks that are themselves highly dubious. And so talk for a moment, if you will about why you just sort of  how they try to block you from getting to this topic and talk about the importance if you will above the movie.”

Welcoming Congressman Mo Brooks to his podcast, the Representative noted, “Well, 2000 Mules brings up a lot of troubling aspects about this last election. Let me go back to the commissioner of federal election reform for a moment, they said that the number one concern with our election system is the mailing out of ballots, because that is where there are weaknesses in the chain of custody with those ballots. We’re never really sure that the registered voter who’s supposed to vote a ballot was the person who has voted that ballot.”

Learn How To Protect Your Life Savings From Inflation and An Irresponsible Government, With Gold and Silver

As for the critics attacking the film and the evidence presented, the Republican saw it as nothing more than a targeted strategy. “When you have these mass mail outs of ballots, you don’t have that chain of custody, you don’t have that evidentiary trail and you don’t know. And so when these fact checkers ramble on with their propaganda about 2000 Mules being debunked, in a court of law, they’re debunking would not stand any kind of credibility whatsoever. The proper way to either debunk or confirm what 2000 Mules says is real simple, we need to have investigative agencies around the United States of America, in particular district attorneys and Attorney General’s looking at the data, the information, the facts, the evidence surrounding what is engaged or exposed in 2000 Mules. And then get to the bottom of whether a particular person committed a particular crime on a particular occasion.”