In addition to the database latency issues discussed previously, here is a brief list of some key issues being reported for the mid-term November 2022 Election:

• Election machines failed miserably across numerous states (https://emeralddb3.substack.com/p/its-obvious-now-americas-voting-system): the machines were all “down” in Mercer County, New Jersey (https://6abc.com/new-jersey-election-midterm-elections-2022-nj-voters-voting-in/12429544/). They were full of “mishaps” in Harris County, Texas (https://www.click2houston.com/news/local/2022/11/08/we-are-well-aware-several-machines-down-multiple-issues-reported-at-harris-county-polling-location/) and in Chesterfield County, Virginia (https://twitter.com/AnthonyNBC12/status/1589952279314300931) and in Bell County, Texas and in Suffolk County, New York (https://twitter.com/bridgetmfleming/status/1590202892040179713). At least 20% of all the machines were “not working” throughout Maricopa County, Arizona (https://www.abc15.com/news/political/elections/tracking-potential-issues-at-voting-centers-ballot-drop-off-locations), causing long delays, and possibly the loss of people’s votes if they weren’t able to stay in line (the judge refused an emergency extension of voting hours). This was also after the state elections office threatened to sue Coconino County if they hand-counted their ballots.

• Voters in Michigan told they had already voted (https://t.me/ElectionFraud20_org_discussion/23818). Same in Pennsylvania (https://t.me/MichaelJLindell/1506).

• Dakota County Minnesota had “modem transmission issues (https://t.me/MDExposure/1202)” requiring results to be transmitted manually. And we’re told that these devices aren’t able to connect to the internet?

• Vote totals in Ohio fluctuating up and down multiple times. Why would a vote total go down?

• NM Governor also had vote count massively increase before falling back down (https://t.me/theprofessorsrecord/9556)

• Colorado’s elections have been massively corrupt for some time, and it’s showing again in the current results

• The chart (https://t.me/MDExposure/1192) for Minnesota Governor looks very dubious. Why so many blue votes at the beginning?

• A New York election worker for the Republican Party was secretly a Democrat (https://t.me/AmericasAuditForce/3599)

• Apparently (https://t.me/theprofessorsrecord/9562) Michigan passed a law that says only the Secretary of State (currently the corrupt Jocelyn Benson) can audit elections

• While Republicans are seeing some good wins, it doesn’t appear to be quite the “red wave” that was predicted in some of the polls. Is this because the fraudulent actors and black box machines are still running the same as they were in 2018 and 2020?

How To Steal Elections With Mail-In Ballots

Based on Jay Valentine article in The American Thinker, 30 Nov 2022.

President Trump said, "REMEMBER, YOU CAN NEVER HAVE FAIR & FREE ELECTIONS WITH MAIL-IN BALLOTS - NEVER, NEVER, NEVER. WON’T AND CAN’T HAPPEN!!!"  One reason why you can't is that database latency can be exploited by corrupt election officials to create ballots that they can use in throwing elections.  Database latency is the time between things happening in the real world, and the time things get reported and updated in some monitoring database.  An example is, if you never put in a change of address, your mail will keep going to the old address, because the sender's database thinks you are in one place, but you are in another.  That is database latency.

Corrupt election officials can use database latency to harvest blank returned, official ballots they can use for their own purposes.  What is done is, for example, is to create a street name that does not exist, and send a boatload of ballots to addresses on that fake street.  Of course, they are undeliverable and they are returned to the election office.  Another method is to simply change the zip code, because that is easier to do on a computer.  The mail goes out with a bogus zip code, and a bunch comes back because the zip code does not exist.  Officials can change zip codes in their database, mail the ballots with bogus zip codes, change the zip codes back to the real ones in the database, and who is going to know?  So, on Election Day, your guy is losing so you pretend break a water main, send everyone home and bring out the blank ballots.  These have to be marked and counted, so you shut down the count for a few days while your guys mark 100,000 ballots or so, count them, announce the results, and Voila!  Your guy wins!

Many states send ballots to everyone; the recipient is none the wiser that they never received a mail-in ballot.  They may vote in person.  Oops!  “You already voted!”  Ever heard that?

Our bad guy pals know they can change voter rolls, take an action, and then change them back.  Who would know?  A thousand voters are changed from inactive, voted, then changed back, and how would you ever know?  With lots of complex footwork, you could eventually tell from their voter history file -- months after the election.  What are you going to do about it?  Reverse the election?

Elections must be conducted with paper ballots (too many ways to cheat with machines), in-person only, election day only, voting with valid ID, elections held with small precincts, counted on-site by election officials, and public invited to watch the count.  If we do not clean up our elections NOW, it will be too late.  Maricopa County in Arizona shows what happens when years of fraudulent elections place cronies of the fraudsters in power.  The Secretary of State is corrupt.  The Attorney General is corrupt.  The sheriff and police are corrupt.  The Board of Elections is corrupt.  The judges are corrupt.  At this point, a candidate can win by a landslide and still lose, and there is nothing you can do about it.  That is what we are seeing in elections today in California, Nevada, Arizona, New Mexico, Colorado, Washington State, Oregon, Illinois and other places.  In the states that are not already captured, the will of the people is being whittled away election by election.  In some places it's already too late for the people to correct years of election fraud.  Military intervention on a coordinated, national scale is likely the only way to remove the embedded corruption.  After the malefactors are removed, the military can hold new elections with paper ballots and we probably can get our Republic back.

May God grant it be so!

Over 100,000 Ballots Dumped For Warnock In Georgia To Shore Up His Totals

Here is another record of ballot dumps in the Michigan governor race. 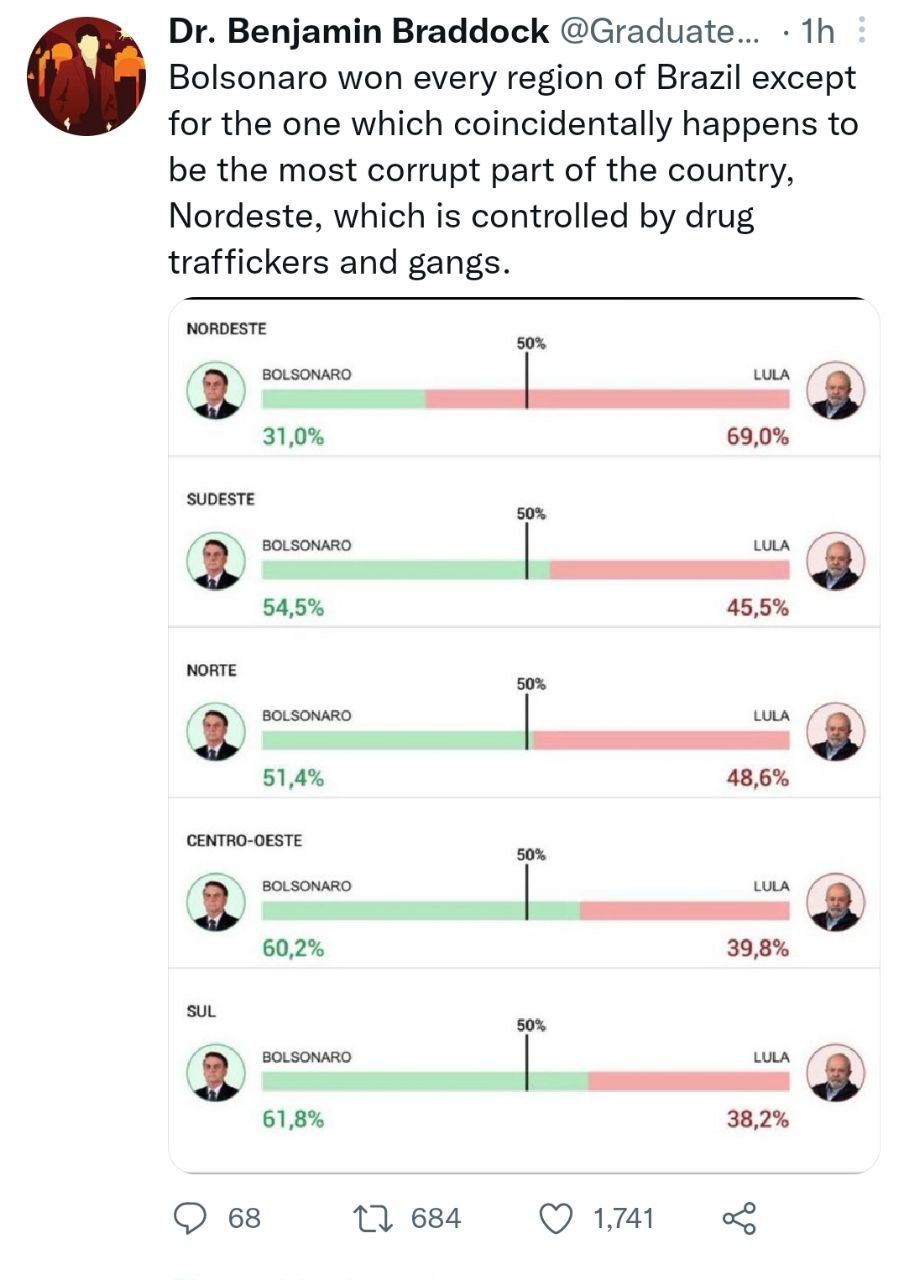 Game illustrating the election fraud that has actually been documented for the US election on November 3, 2020 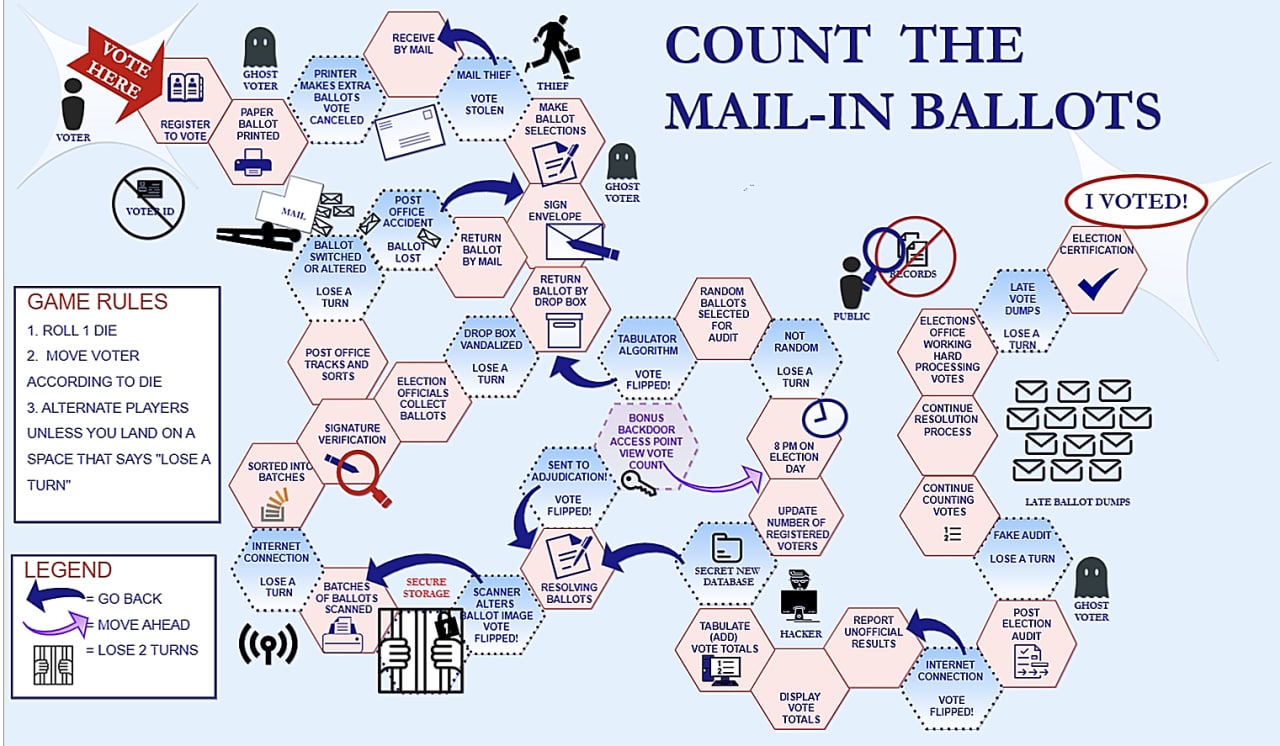 Captain Seth Keshel reviewed the 2020 Senate races and determined the real Senate makeup should be at a minimum 63 R and 37 D.  That's how much fraud affected the election.

Here is the down and dirty: 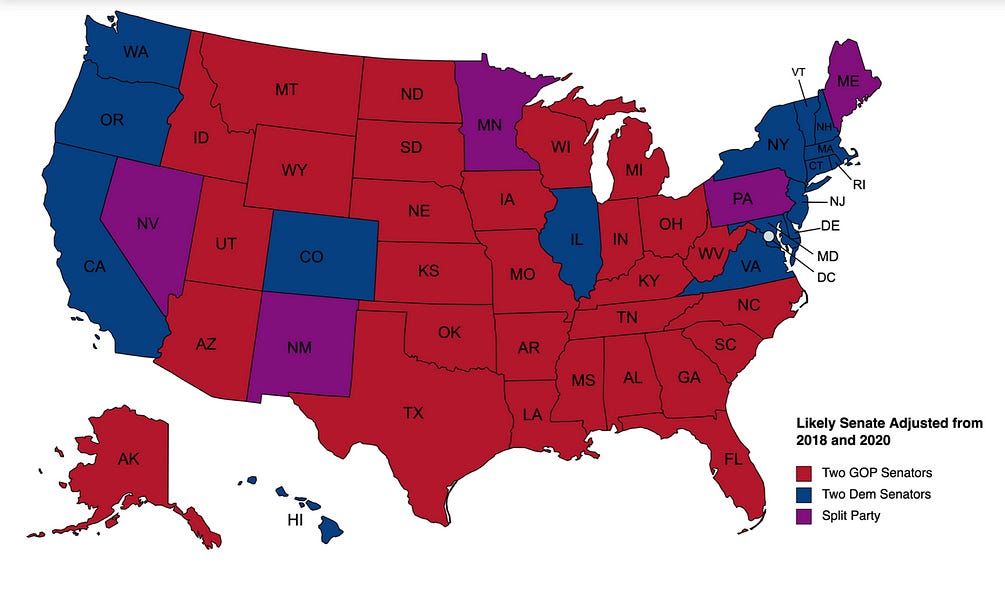 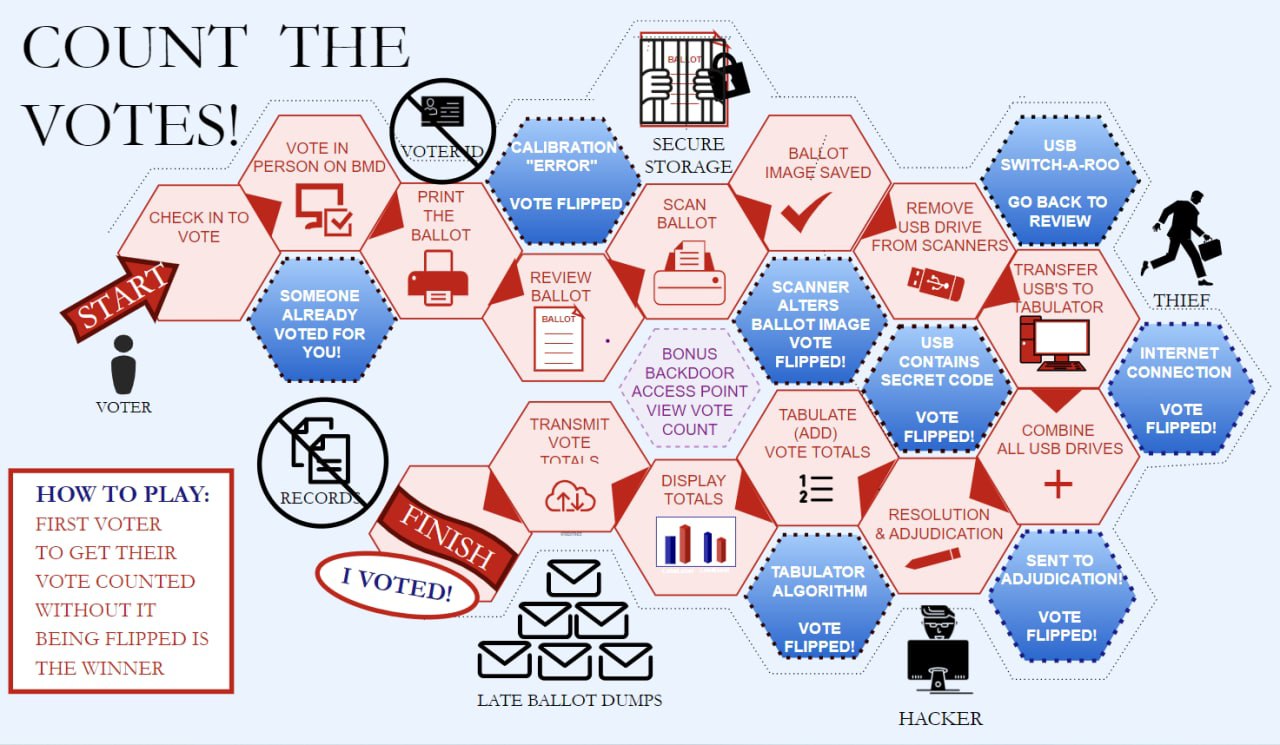 Elections By Mail: What Could Go Wrong? 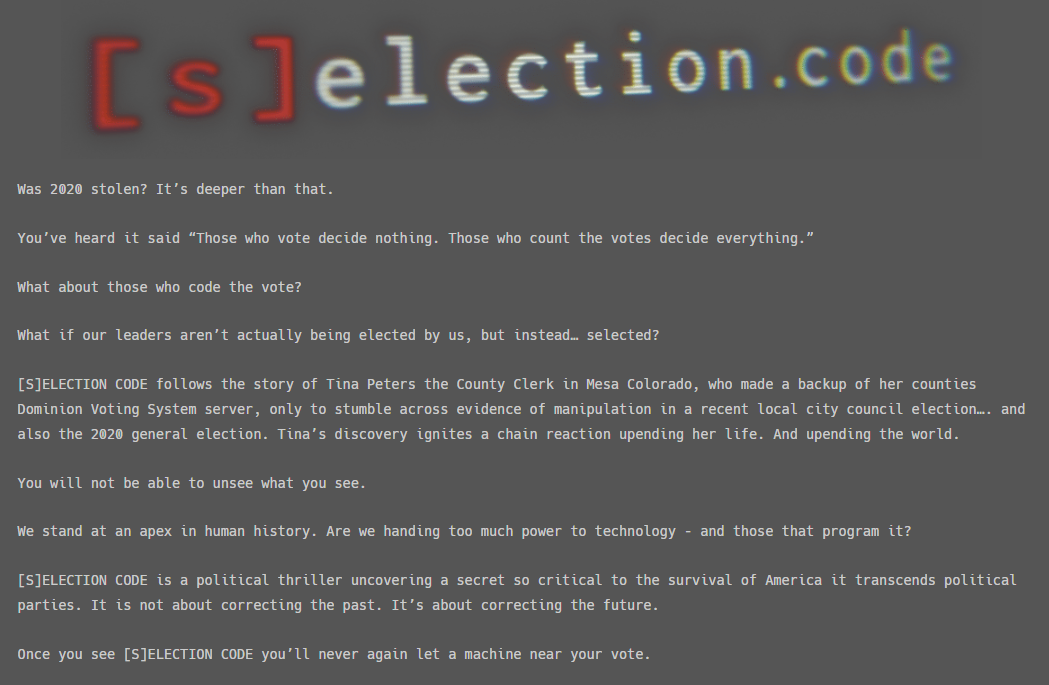 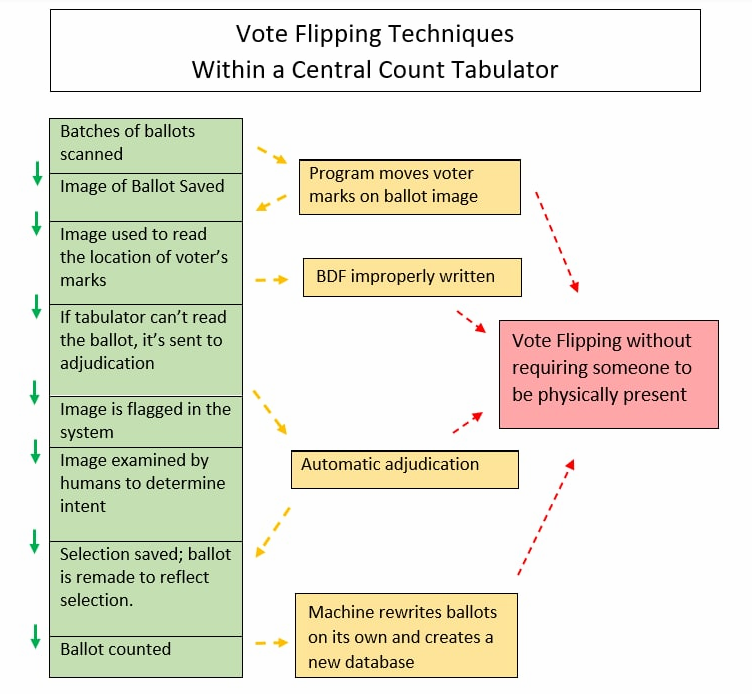