🧨🧨🧨 ATTENTION TEXAS! 🧨🧨🧨 The Attorney General has just issued official AG Opinion KP-0411 designating anonymous ballot information as public information! In other words, you have the right to CVRs (Cast Vote Records) and to inspect physical ballots NOW. Since the federal 22-month retention period for the Nov. 3, 2020 election expires on Sept. 3rd, GET YOUR COUNTY's CVR TODAY. Send them this ruling, since official AG opinions have the force of law until the legislature says otherwise. https://texasattorneygeneral.gov/sites/default/files/opinion-files/opinion/2022/kp-0411.pdf

Rise of the America First Republicans

The left-wing MSM are in full cope mode, mourning the loss, fawning over Cheney as if she were some legendary war hero. Joe Scarborough compared her to Ulysses Grant in the Civil War. They are even suggesting that this loss will lead to her 2024 Presidential Campaign to unseat Trump… when she just lost her own State primary by 37 points to a Trump-endorsed candidate. Cheney compared her loss to President Lincoln's loss in his Senate and House races. 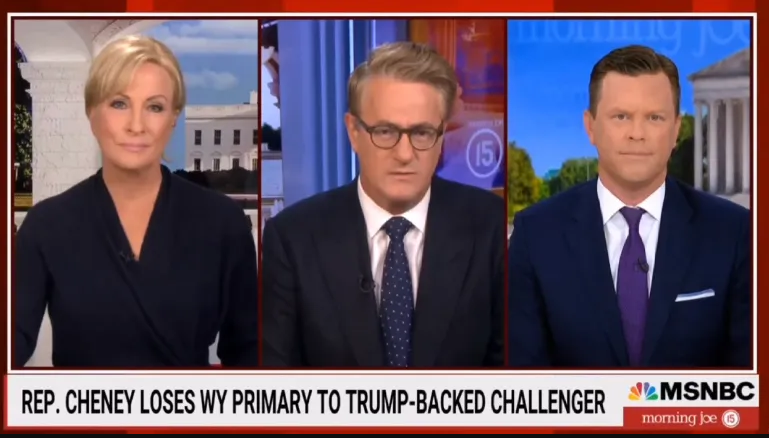 Now, much like the AZ Gubernatorial Primary, the Wyoming At-Large Primary was much more than an individual win. These successive wins in convincing fashion are a representation of the political climate heading into November. The establishment GOP are being cleansed, and the Wyoming GOP has now become the America First Party. As Trump put it, “The People have spoken!”.

Not only are these massive wins for MAGA and Trump, the manner in which they have unfolded confirms the America First agenda. Which is primarily that 2020 was stolen, Biden is illegitimate, and the Deep State are engaged in mass coordinated voter fraud.

These primary elections MATHEMATICALLY CONFIRM mail-in voting is being manipulated, and the manipulation only goes one way. How do we know? The trend of mathematically inexplicable variance between mail-in and in-person voters. Kari Lake was down 10+ points from the early vote, and ended up winning by 2.8 points. Harriet Hageman was up 10 points early, and the margin widened to nearly 40 points. These trends show the early vote is leaning in favor of the establishment candidates, but the in-person voters are HEAVILY in favor of America First candidates.

What scientific explanation can there be for there being such a wide variance between the mail-in and in-person vote? In a General Election, DNC voters are more likely to be afraid to vote in-person, so the variance could plausibly be much higher between DNC and GOP, due to the political ideology between the two bases. But in Primary Elections, the absolute highest variance between mail-in and in-person should be around 3%.

The fact that the discrepancies are so significantly outside the expected mathematical norms and repeatedly skewed to the detriment of Trump-backed candidates, it CONFIRMS the mail-in vote is being manipulated, specifically by enemies of Trump, i.e. the Deep State.

Despite the mathematical certainty of voter fraud in favor of the Deep State, America First are STILL dominating, and GOP total turnout has dwarfed the DNC, indicating that the General Elections will see a massive Red Wave. This has the Left terrified, as the American People have sided with Trump, once again. 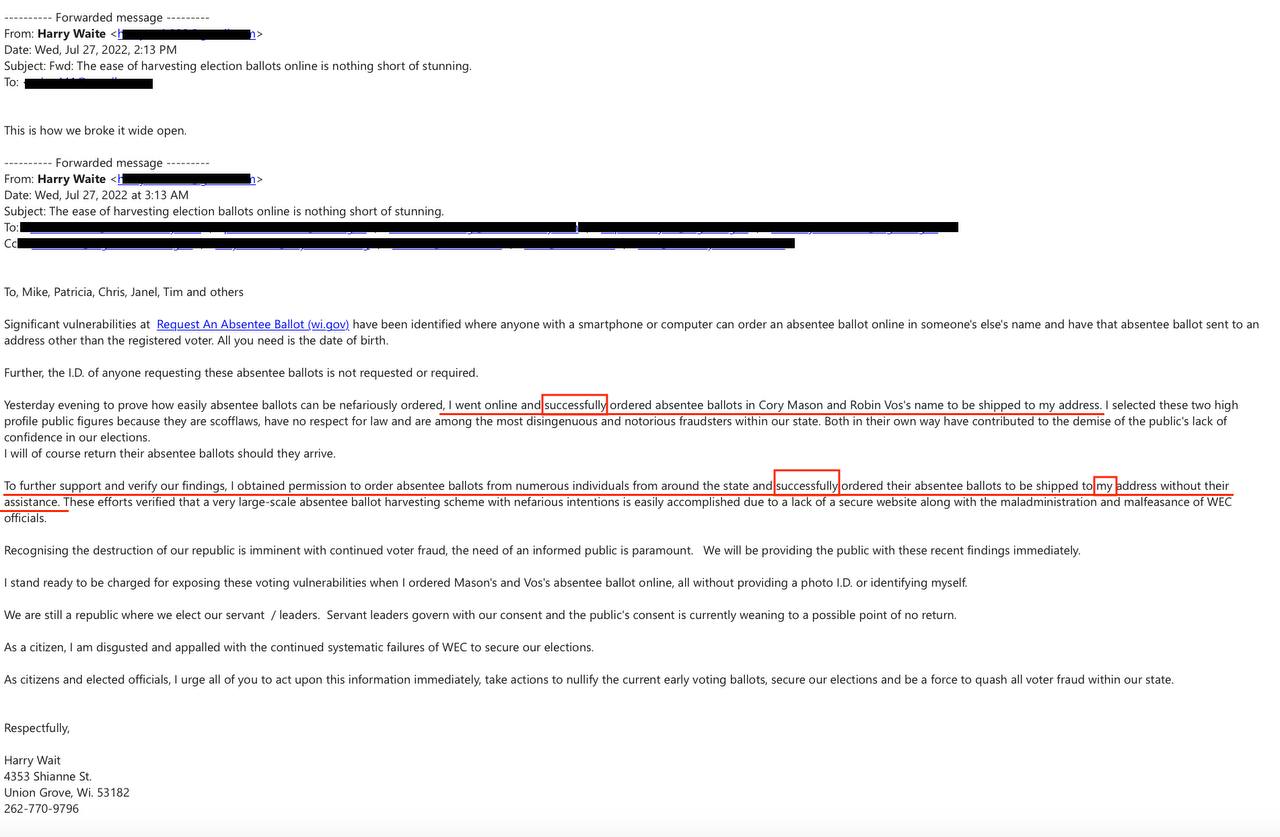 The drop boxes and mail-in voting vulnerabilities can be used to harvest hundreds of thousands of votes, and Biden "won" Wisconsin by about 20,000 votes.

Components Of A Secure Election

In the graphic below you can can steps in the voting process.  Each of these steps has documented problems leading to voter fraud, and the graphic does not even include the problems with voter dropboxes that were so massively abused during the last election.  In many cases, the problems are very big (hundreds of thousands/millions of votes statewide) and subject to non-transparent manipulation by the local and state officials.  It appears the voting machine software is written to keep two sets of books.  One is for public consumption to show only what the designers wish to be viewed and it is essentially not auditable.  The second set of books can be manipulated by the software and even by remote sites logging/hacking in to the voting machines.  In Ohio the local machines are dirt simple and do not appear to be that susceptible to manipulation except at the state level during the tabulation and aggregation processes where the processes are completely opaque, are connected to the internet, are not auditable and are firewalled against any citizen access or any accountability to any governing authority including the Attorney General and the legislature.  In 2020 election the process was so bad that there were more total votes cast than there are registered voters.  No computer voting system is ever likely to be safe from manipulation, because the process is inherently non-transparent.  A simple paper voting process with votes publicly counted at the precinct level and subject to audit and recount for a very minimal fee is easy to create.  Taiwan has a system where the votes are counted at the precinct hall in public.  The counter holds up the ballot and calls out the vote.  The vote called by the counter is subject to challenge by anyone present.  There is no reason we could not clean up our voter rolls and have paper ballots that are publicly counted at the precinct level.  Such a system is MUCH, MUCH less subject to fraud than the current opaque and fraudulent voting system that is stripping away our constitutional rights and our republic, as the last "election" clearly showed. 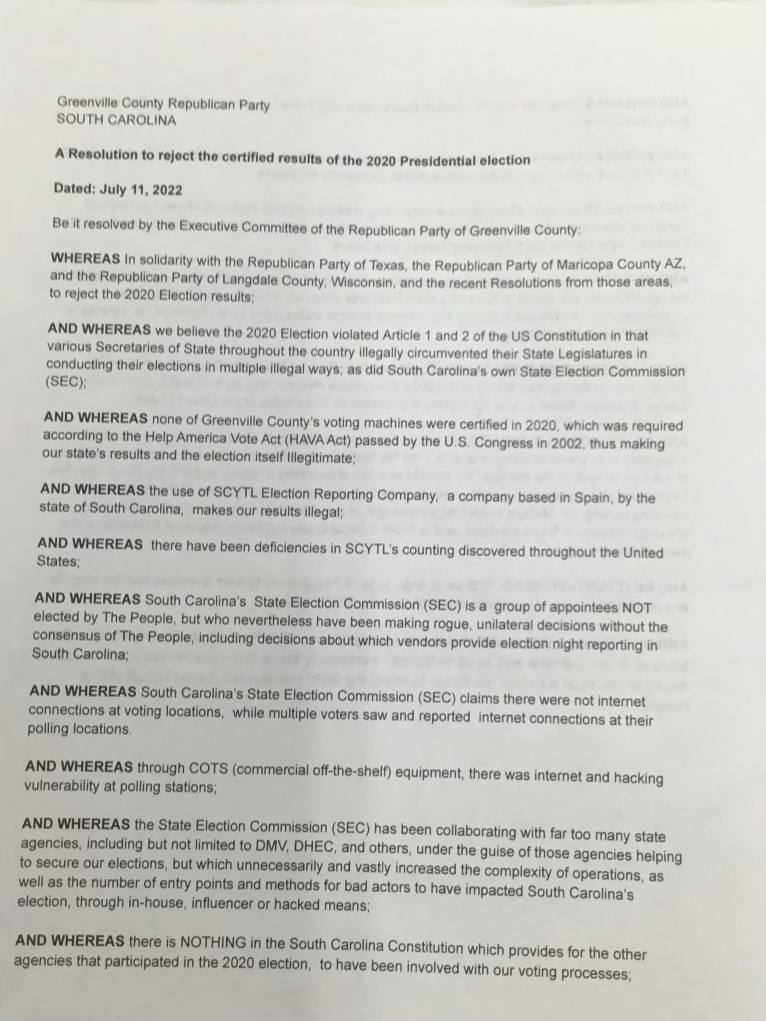 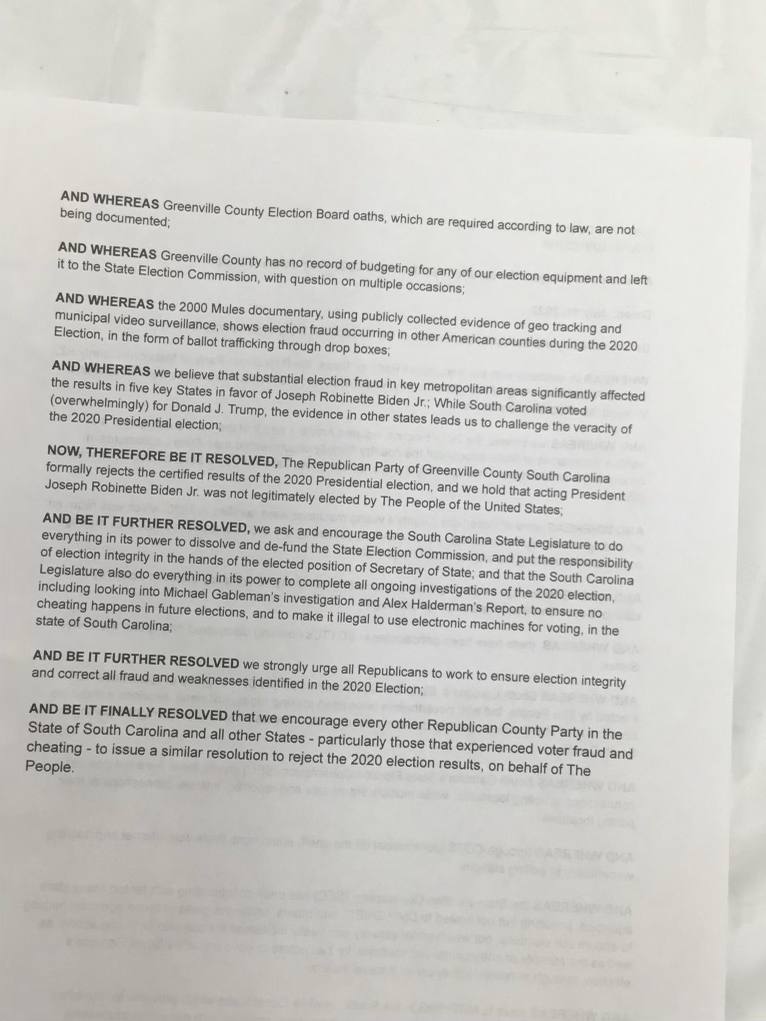 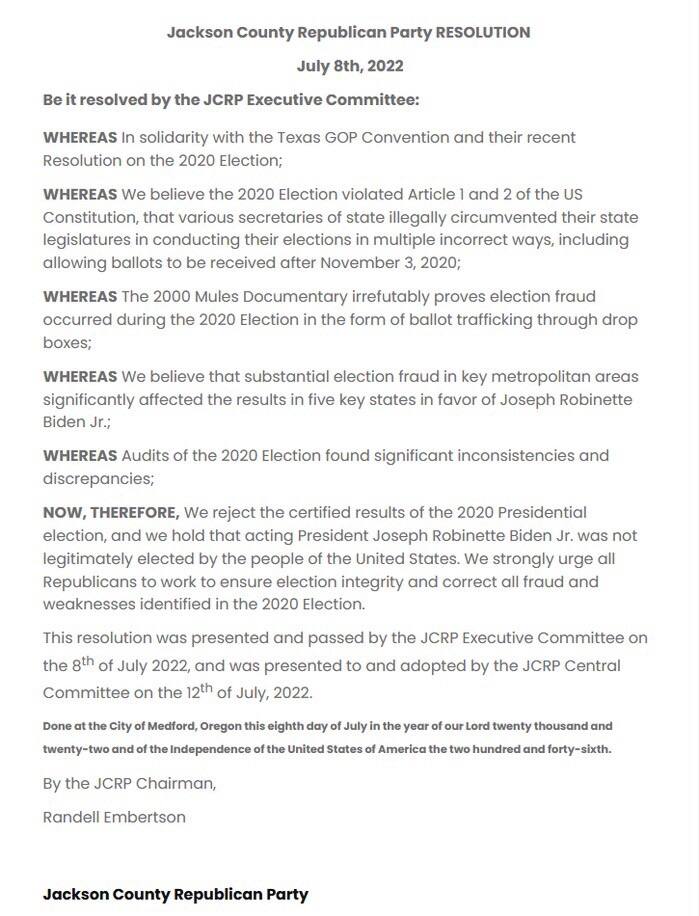 As midterm voting kicks into high gear, Republican activists in Washington are organizing surveillance of ballot drop boxes, generating complaints and concern from some elections officials.

Over the weekend, signs were posted near ballot boxes in several Seattle-area locations, with red letters warning the boxes are “Under Surveillance” and stating that accepting money “for harvesting or depositing ballots” may violate federal law.

A scannable code on the signs pointed to a section of the King County Republican Party website with a form encouraging people to submit “election incident” reports, including photos and video.

Meanwhile, a group calling itself “WA Citizens United to Secure Ballot Boxes” is promoting drop-box surveillance statewide, encouraging people to sign up to watch ballot boxes and record video of people “dumping an in ordinate [sic] amount of ballots” and “taking pictures of themselves doing it,” according to the organization’s “Drop Box Watch” website.

The signs in King County were spotted near at least two ballot boxes in Seattle on Sunday, at the Lake City and Broadview branches of the Seattle Public Library.

King County Elections spokesperson Halei Watkins said the office received several reports about the signs popping up over the weekend near Eastside ballot boxes, including in Issaquah and Redmond.

While it is legal for people to observe the county’s 76 ballot boxes, which are located on public property, the message on the signs has raised concerns about possible intimidation. Watkins said King County Elections has notified the County Prosecutor’s Office “to check on the legality” of the effort.

“Certainly the signs out at the drop boxes are a little bit worrying,” Watkins said.

Thurston County Auditor Mary Hall, a Democrat, said she’d been alerted to the statewide surveillance effort and doesn’t understand what the people running it expect to prove. “I’d characterize it as voter intimidation,” she said.

Unlike some other states that limit the practice, Washington law allows people to drop off legal mail-in ballots for other voters with no restrictions.

Family members often drop off ballots for one another, Hall said, but it’s also legal for groups to hold “ballot parties” and collect a bunch of votes to turn in together. The ballot signatures are all checked before being counted to ensure the votes are legal, she noted.

Mathew Patrick Thomas, chair of the King County Republican Party, said in an interview Monday morning he had not been aware local GOP volunteers were placing the signs near ballot boxes until he got a call over the weekend from King County Elections Director Julie Wise.

FYI Seth: 1st FL county to join TX, Maricopa and Langlade is Brevard … one of your top 100!

RESOLUTION THAT WAS PASSED

The Honorable Wilton Simpson, President of the Senate;

The Honorable Chris Sprowls, Speaker of the House;

The Republican Party of Brevard County Florida is proud to be the first in Florida to support the Texas Republican Party, the Arizona Maricopa County Republican Executive Committee (REC), and the Wisconsin Langlade County REC by passing this Election Integrity Resolution. Large-scale election fraud in other states, while choosing electors, has resulted in Brevard County Florida voters being disenfranchised in the political election process by having their votes stolen.

We support the good work of Florida Governor DeSantis and the State Legislature in passing Florida SB 90 and SB 524 Election Integrity bills. We strongly urge Brevard Republicans to volunteer as poll watchers and work to ensure the highest level of election integrity. Make sure all your Republican friends, family and neighbors vote in the Primary Election on August 23rd 2022 and in the General Election on November 8th 2022 to ensure that Republicans overwhelm any possible election fraud in Brevard County and elsewhere in Florida.

We believe that the 2020 election violated Article 1 and 2 of the US Constitution, that various secretaries of state illegally circumvented their state legislatures in conducting their elections in multiple ways, including by allowing ballots to be received after November 3, 2020.

We reject the certified results of the 2020 Presidential election, and we hold that acting President Joseph Robinette Biden Jr. was not legitimately elected by the people of the United States.

We strongly urge all Republicans to work to ensure election integrity and to show up to vote in November of 2022, bring your friends and family, volunteer for your local Republicans, and overwhelm any possible fraud.

House Bill 1878 was signed by Mike Parson on Wednesday. The legislation requires voters to show a photo ID in order to vote in elections conducted after August 28th. Voters will now also be required to provide identity verification.

Why wasn’t this done before? Is it not common sense that without verification, voter fraud will be easily achievable?

People can still cast a provisional ballot without a valid photo ID but they will have to sign an affidavit declaring they are a registered voter. This will then get verified by officials.

Many Americans backed claims that some votes seemingly came from people who were no longer alive. These “dead people” somehow voted in Michigan during the last election run - immediately contributing to voter fraud. After all… who would vote for a man who can’t structure a coherent sentence together without a flash card?

Biden can’t guide himself through his own building without getting lost, but is now supposed to guide the American people? How did a person that is this incompetent get into power if it wasn’t for voter fraud?

This latest attempt by the GOP supermajority in the Missouri legislature to enact a voter ID law will likely be challenged in the courts. While lawmakers have approved the idea numerous times, and voters approved putting it in the state constitution in 2016, voter ID laws have never withstood a legal challenge, according to a report in the Missouri Independent.

Why should this be challenged?

Would it be challenged if a 13 year old had to show ID to buy alcohol?

Then why would ensuring that elections which decide who will be the leader of the free world, be challenged?

[A better question is, why would a sane court find it unconstitutional to prevent illegal aliens from voting in US elections or even hear the case? JRJ]