As shared in, “fraud PROVEN in Colorado, cabal freaks out, legislators respond,” the revelations in the three Mesa Reports, combined with the Colorado Canvassing Report, have conclusively proven that the Colorado elections are, in fact, the Gold Standard of Fraud.

All four of these Colorado-focused reports were generated by domain experts and are peer-reviewed to ensure they are nothing but the truth. And the truth is that Colorado elections are not free and fair – they are undeniably manipulated through a controlled system.

As Holly at Altitude wrote in early 2021, Colorado is the Election Fraud Test Kitchen – they bake the methods and mechanisms of fraud here, and they test to see if the people will choke it down and call it good. It’s worked – the people of Colorado have been trying to deprogram our elected officials from all the brainwashing for the past 15 months. We’re having to pry the gold standard trope from their white-knuckled grip but, thankfully, many of them are now waking up.

The people of Colorado have been pressuring our local and state officials to investigate election fraud since before the Trusted Build began destroying evidence in Spring of 2021. In my previous article, I shared how this pressure campaign now has some Colorado elected officials asking questions.

And, in light of the communist legislation trying to make its way through the Colorado legislature right now, I’ll channel Bernie Sanders to say, “that’s a good thing.”

It’s actually a really good thing, because it forced Matt Crane, Executive Director of the Colorado County Clerks Association, and an alleged Republican, to address the substance (read: evidence of criminal conduct by Griswold) as revealed in the reports. This hadn’t happened in Colorado before last Tuesday, and Crane’s disclosures in the email have given us some new information.

From a Cause of America press release issued Wednesday, March 23:

“In a show of blatant incompetence or worse, the Executive Director of the Colorado County Clerk’s Association, Matt Crane admitted to election crimes by CO’s Secretary of State.  Crane outted the fact that CO SecState Griswold approved untested, uncertified software which was illegally installed on electronic voting equipment in Colorado.  This is a confirmation of findings in the Mesa 3 Forensic Report.”

Complaints are only useful if they are paired with solutions.  We already know enough about 2020 to make a national case for decertification.  In all truthfulness, we are only able to “stay in our lanes”.  Staying in our lanes means to not get distracted with the final outcomes when there is still plenty of work to be done by teams, whether they are exposing fraud through analysis or canvassing, arguing in court, or contributing content through the new media.  Keep on the pathway to fixing every problem you encounter.

VIII. Election Day is a Holiday

X.    Heavy Prison Sentences for All Who Commit Fraud

True The Vote says the cell phone GPS tracking data they used to find and trace the movements of the mules being paid to stuff ballot boxes in Georgia proves the mules were working out of TWO Democrat officials' offices - and one of these offices being used for these ballot box stuffing runs was that of STACY ABRAMS.  Stacy Abrams bio says, "Her efforts have been widely credited with boosting voter turnout in Georgia, including in the 2020 presidential election, when Joe Biden narrowly won the state, and in Georgia's 2020–2021 regularly scheduled and special U.S. Senate elections, which gave Democrats control of the Senate."

“So after 50 years of being virtually empty, I built up our oil reserves during my administration, and low energy prices, to 100% full. It’s called the Strategic National Reserves, and it hasn’t been full for many decades. In fact, it’s been mostly empty. It’s supposed to only be used for large-scale emergency or conflict. Now I see where Biden has just announced he’s going to take what we so carefully and magically built, and what will be a futile attempt to reduce oil and gasoline prices. They will soon bring it down to empty again. It just never ends!” 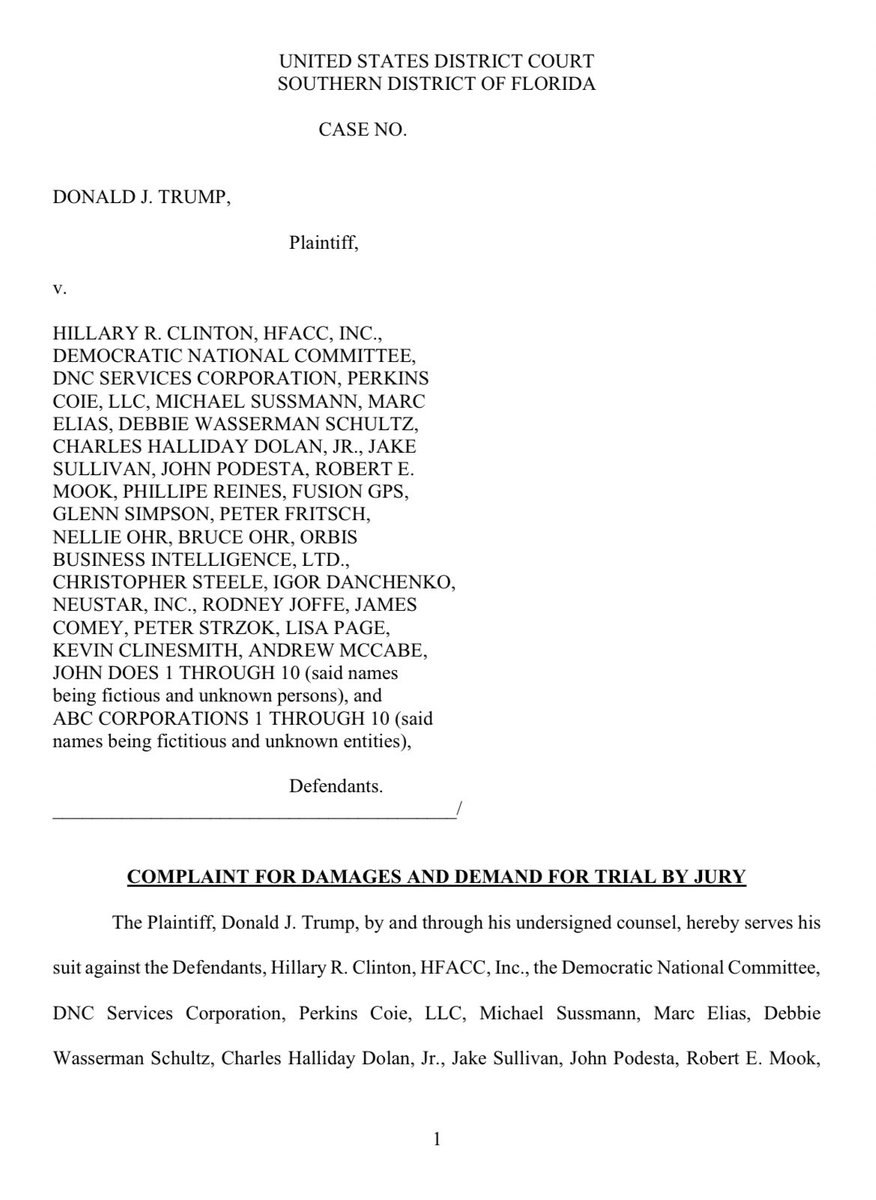 @DineshDSouza has a documentary coming out next month, 2000 Mules. It shows the cell phone pings of thousands of people visiting the same drop boxes over and over and over in a period 2 weeks before the election.  2000 mules were deployed across swing states. They were financed with leftist dark money that was funneled through non-profit NGO's.

Some of those individuals were also allegedly present at violent riots in WI.

I [Lady Draza] am very interested in seeing what TrueTheVote found with regard to the #2000Mules [ballot dropbox stuffers]. I understand that they purchased the cell phone ping data from the cell phone carriers.

So what is cell phone ping data? These are signals that are sent out to your cell phone that amount to the conversation that takes place in so many houses: Momma: "Where are you?" - Child: "I'm right heereeee."

This is how the cell phone company, at a basic level, determines which cell tower to route your phone call through. At a more advanced level the data is processed and filtered for things like determining if your device is in an area to get a "Severe Weather Alert". So, TrueTheVote brilliantly purchased this data from the cell providers for the time around the election. They then went to parsing it to see if they could follow the paths of individual phones to see if there were any paths of interest. When they found a phone that was on the route to ballot drop boxes, now they not only had the phone number, but the time. They could then review the hours and hours of drop-box video coverage for the exact time that the phone of interest was at the drop box location - and THAT is how they got the video evidence of the individuals shown on the movie trailer, taking pictures of the ballots they were delivering and stuffing the boxes.

The reason I am writing this - that most of you already know - is, I want you all to begin considering some questions and the repercussions of what is going to happen depending on what the total TrueTheVote data reveals.

Question 1: What would it mean if each of these routes all start from the same location?

Question 2: What would it mean if each of those routes all start from the same location - each day - for a couple of weeks before election day?

Question 3: How many cities do you think this occurred in?

Question 4: How will "We the People" be prepared to ensure that everyone understands what was done to us, and what will we as a collective voice be asking for with this irrefutable proof?

The third official forensic Mesa Report, Colorado analyzing Mesa County electronic voting systems shows that the Mesa County electronic voting system contained multiple databases, which should not have been present and also indicates manipulated vote counts. The multiple databases in the voting system show ballot and ballot batch records were moved and changed, breaking the chain of evidence, leaving the true vote count unknown. This makes the vote count in Mesa County’s voting system impossible to authenticate, or prove accurate, voiding the legal certification of Mesa’s election. The report goes on to explain that this illegal activity happened in two different elections and there is no possible way this manipulation was an accident.

The first forensic report analyzing the Mesa County electronic voting systems showed that at least 29,000 election records had been deleted at the direction of Colorado Secretary of State Jena Griswold. The second Mesa forensic report exposed numerous system vulnerabilities including firewall and security rules that would allow any computer in the world to connect to the voting system server, and 36 separate wireless networking devices in the voting system. Between the wireless devices, the insecure configuration, and the destroyed election records, the voting system could have been undetectably connected to the unauthorized devices, networks, and the internet, directly, or indirectly. In the third report, there is undeniable evidence that vote counts were changed and manipulated.

According to systems testing expert Col. Shawn Smith (ret.) USAF, ”In contrast to Voting System Testing Lab personnel, who ‘claim no specialized knowledge or background in cybersecurity,’ the computer experts who authored the ‘Mesa 3 Report’ have 80 years of combined experience and expertise, including degrees in computer science and mathematics, defense and national security experience, and are making all evidence available to the public and other researchers.”

The evidence of destroyed election records, unauthorized software installation, multiple manipulated vote counts, databases, and unmonitorable wireless networking equipment exposes numerous federal and state criminal violations, including civil rights violations. None of these violations would have been detectable to local election officials without this report. The public is calling for immediate criminal investigations by both federal and state law enforcement.

Officials in Harris County, Texas said they found about 10,000 ballots that were not counted in the May 1st, 2022 primary election, leading to a delay in some results.

The Associated Press reported that officials in the county, which is home to Houston, said late Saturday that these ballots had not been counted toward the unofficial election results.

The Texas primary on March 1 was the first statewide election in the nation in this midterm election year. It came amid the state's new, more restrictive voting laws.

Officials said about 6,000 Democratic votes and 4,000 Republicans votes were not counted and will be added to final tallies.

“While the votes were scanned into our tabulation computer, they were not transferred and counted as a part of the unofficial final results as they should have been,” the Harris County Elections Office said in a statement, according to the AP.

JRJ Comment:  This kind of thing happens frequently and it is just shrugged off as if it didn't matter, but without honest elections, we don't have a country any more.  Right now, most politicians are installed via election corruption, and they are not really elected. There are many avenues of corruption in the elections including rigged voting machines, voting machines attached to the internet at state level, drop box ballot stuffing, voter registration fraud, mail in ballot fraud, outright vote changing via the voting machines, mail in ballot fraud, dead people voting, people voting multiple times, minors voting, ballot harvesting in nursing homes and other places, bought ballots, and many others.  The main sources of voter fraud appear to be the rigged voting machines of which Ohio has many and mail in ballots, which Ohio uses.  If a state exclusively uses mail-in ballots only like Washington State and Oregon, free elections have been lost and the machines install whoever they have chosen.  Ohio appears to have significant voting fraud, particularly in Columbus.

Wisconsin House Speaker Vos Says Despite ‘Widespread Fraud,’ the Only Remedy Is a New Governor and New Attorney General.

In a brief statement to reporters after his decertification meeting, Speaker Robin Vos said he believes there was “widespread fraud” in the Wisconsin 2020 election but there is no retroactive remedy:

“The problem gets down to what’s the remedy? There are some people who think the legislature has the unilateral ability to overturn the election. We do not… They are trying to convince us of the fraud that occurred. I already believe there was fraud that occurred... I think there was widespread fraud. And I think we are going to see more and more data that comes out as Justice Gableman continues his investigation.”

Vos concluded by saying he believes the only “solution” to the fraudulent 2020 election is to elect “a new governor and a new AG” to ensure well-run elections going forward.

JRJ:  There was no legislative precedent or solution to King George III's tyranny either, except the people said, "When in the Course of human events..." it became necessary to "dissolve the political bands which have connected them with another".  Where there was no way, they made a way.  There was no precedent for that either.